WHAT WILL BE THE IMPACT WHEN SATURN MAHADASHA AND SATURN / SHANI SADE SATI IS RUNNING TOGETHER ?

Both Saturn mahadasa and sade sati have different agenda of events during their period and they both give results on different principles. The mahadasa of a planet in a horoscope gives it result of the houses it signify in the horoscope as per KP vedic astrology. According to KP vedic astrology the planet is the source, the nakshatra gives the results and the sublord denotes the quality of the events.

The tenures of mahadasa system of planets are fixed rules for all and operates one after another as per the orders of planets fixed by our great sages / rishes. The mahadasa results get activated by the transit planets when they pass over the nakshatra lord of the planet positioned in and its same with Shani or Saturn mahadasa also.

So during shani / Saturn mahadasha period, Saturn gives the results of the nakshatra lord where it is posted and its houses and Saturn itself becomes the source of the event.

An astrologer can very easily predict about the results of the Saturn / Sahani mahadasha after reading the horoscope / kundli because there are dictums already given and an astrologer only need to follow that.

On the other hand although the tenure of sade sati of Saturn is fixed and its of 7.5 years BUT THE IMPACT OF IT IS DIFFERENT AND CAN NOT BE LEARNED FROM THE HOROSCOPE / KUNDLI. It gives its impact on the basis of past KARMA / DEEDS IN THIS LIFE.

If a person do good karma, then during sade sati time he gets his rewards and Shani Dev do not punish but bless him for his progress. The subject of sade sati has different versions in our vedic astrology and I am writing as per my experience as I have undergone 2 sade sati in my life.

Sade sati of Saturn ACTS LIKE A TEACHER AND PUNISHES US IF WE DID MISTAKES, SATURN ALSO GIVES US A CHANCE TO RECTIFY / MEND our past actions if we did it wrong.

SADE SATI TEACHES US HOW TO LIVE A GOOD LIFE IN THIS WORLD HONESTLY. The teaching could be punishable and painful for someone who did wrong karmas in the past and can be a rewarded one for those who did good karmas.

Definition of karma should be taken as doing good or bad work in the society. Example donating poor is a good karma and cheating someone is a bad karma. Karma itself is a very big topic and understanding it needs a huge explanations.

So one thing is very clear that no one is spared in this life doing bad Karma, Saturn will definitely teach him / her a lesson and give chance to change the wrong path a lead a good life.

If there is no such intention in that person then Saturn sade sati gives such impacts that even after the completion of its period also the person become incapable doing anything as he is still carrying his bad karmas in his mind to carry out evil actions.

For example a bad person getting paralyzed during sade sati and not recovering in his life. So even after the end of sade sati he cannot do anything evil as he did not want to learn the lesson taught to him by Great SHANI DEV.

So in a nutshell one should treat Saturn mahadasha and sade sati of Saturn as two different impact which have no connections with each other. 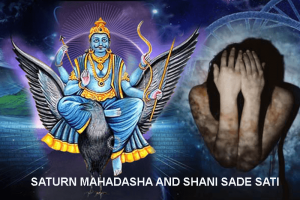