The native in question wanted to know whether to do job or business as per astrology, can he continue with his father’s textile business or look for something different of his own or do job, as per vedic astrology of his horoscope reading.

Business or job astrology by date of birth is  based on the given birth details DOB 17-8-1978 at 01:58 AM in Belgaum, Karnataka, India and the analysis is done as per KP vedic astrology padhatti / system.

The moon is in uttarshada nakshatra in makar rashi / moon in Capricorn sign and the current ruling mahadasa is of Jupiter. 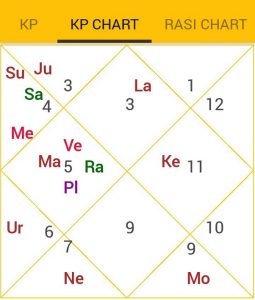 For job or business in astrology one need to study the 6th, 7th 10th cuspal sublord, the study of mahadasa will reveal how the current ruling lord is giving its impact on the native in its ruling period and how will it give its result on the business event during its ruling period.

If one is destined to business then 7th house plays an important role as the native have to deal with opposite person and so his 7th cuspal sublord should not show negative.

From the horoscope the 6th cuspal sublord is sun and its signifying 3 and 4th house in the planet level, ketu – 2,4,6,7,8,10,11 and 12th house in the nakshatra level and venus strongly signifying 4 and 6th house as its untenanted in the sub sublord level.

The sun is in conjunction with mercury signifying 1,2,3 and 5th house.

Venus is in conjunction with mars signifying 4 and 12th house.

For job or business astrology the analysis it is clearly understood that that the native in his destiny has business and that too his family business. So the native can very well join his father’s textile business.

The question of the native was obvious as he is going thru tough time which was indicated by the 5,8 and 12th house significance in the above analysis, but that is part and parcel of life, sometime its night and sometime its day, which all has to go thru. 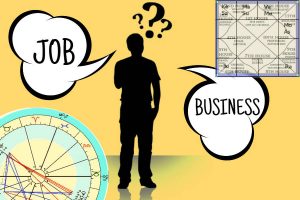