Will I get divorce astrology

The native in question is suffering a lot with her in-laws and her husband was not supporting her and on the contrary supporting his mother, so wanted to know if the relationship will improve or she would have to take divorce as per vedic astrology of her horoscope.

Divorce astrology by date of birth

Based on the given birth details DOB 30-7-1987 at 7:05 AM in Lucknow, Uttar Pradesh, India and the analysis is done as per vedic astrology paddhati / system.

The erected horoscope shows simha lagna / leo ascendant with moon in the 1st house, ketu in the 2nd house, Saturn in 4th house, rahu in 8th house, Jupiter in 9th house, mercury in 11th house and venus mars and sun in 12th house.

The moon is in uttarphalguni in simha rashi / moon in leo sign and the current ruling mahadasa is of rahu. 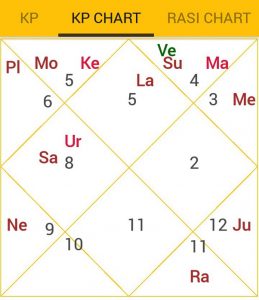 HOROSCOPE ANALYSIS FOR DIVORCE IN ASTROLOGY

Venus is in conjunction with sun signifying 1,2 and 12th house.

The 8th cuspal sublord is venus and the analysis is already done.

The 7th cuspal sublord ( house of marriage ) is strongly signifying 6,8 and 12th house which signifies that the divorce will take place.

The 8th house denotes pain and agony during that period.

The 12th house shows separation for the native herself.

The mahadasa is also strongly signifying 6,8 and 12th house which means that the period will give the impact of separation event for the native with pain.

The relation with the in-laws is also not going to improve as the signification of 6,8 and 12th house do not show improvement.

From the analysis I conclude that in the destiny level the native has got no support from planets to improve her relationship with the in-laws and so she had to try very hard by doing positive free will karma to improve on the relationship.

Divorce or separation in astrology

The same is the effect on her marriage relationship also and so she need to work hard on her free will karma to tune the relationship, otherwise it will lead to separation it future.

The destiny of the horoscope shows separation and there are many factors involved in it. It will be wrong to say that all the faults are of the in-laws only and the native is in no fault in problem of relationship. Learning from past mistakes and not repeating again always lead to success, but the native is not in a stage of learning.

In case of divorce one need to see both husband and wife’s horoscope to determine the timing of separation as both are participating in the event. From an individual’s horoscope one can determine the promise of the divorce in one’s destiny. 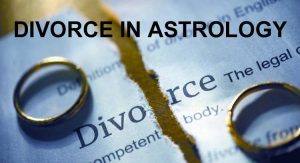