Name change astrology : does destiny really change ? is a question which many have in their mind. Does change in spelling of name helps in changing the destiny ?

There are many remedies in astrology to give ease in life for a native. According to my understanding remedies cannot change anyone’s destiny but can minimize the malefic or negative effect of the planets and thereby giving a bit ease to the person in difficulties.

There are mantra shastras where a person is asked to recite a mantra for a particular number of times along with the systems that the person has to follow during its perform.

There are gemstones remedies where ring of a particular gemstone is asked to wear in a particular finger with some rituals and systems during ring wearing ceremony.

It doesn’t mean that all need to change their name, the expert decide if the vibration of the present is suitable and useful or not thru their analysis.

MY PERSONAL VIEW is that our destiny is fixed the moment we took birth in this earth. Our destiny is govern by the nine planets, of-course rahu and ketu are not physical planet and they are a calculation figure to which the vedic astrology has given if a virtual physical form so name change astrology do not have much impact on a person’s destiny.

These nine planets are so powerful that they give all the events of our life, be it the smallest of small events or biggest of big events.

There are many shastras is astrology where the nine planets are used in analyzing the destiny of a person and they give very accurate predictions.

The nine planets shastras of astrology is so powerful that predictions can be made about person without seeing or knowing and without any form of birth details or any details of that person.

According to the nine planets shastras of astrology generally for analyzing the destiny of a person a horoscope is erected by various calculations. The horoscope is a pictorial form of a calculation of the freeze planets during the birth of a person on that time, date and place of birth of that person.

Name change  according to vedic astrology is also there according to the nakshtra and its pada where moon is positioned in the horoscope, but that name do not govern the destiny. It’s just for a good vibration that gets harmonized with the other planets of the horoscope.

Every horoscope is unique as every human being is unique and so is their destiny and that is the reason that while reading the horoscope that same planet in same place in different horoscope gives different predictions.

There are so many people with same name and birth date and not all have the same destiny and same occurrences of the events in their life.

Destiny was fixed the moment a person took birth in this earth when his / her name was not even decided by their parents. So changing the spelling of the name will not any impact as it do not govern the destiny.

By changing name or spelling of it will not make a beggar a rich person nor it can be done with any astrological remedies as the promises of the events and the destiny gets freeze the moment the person takes birth.

I do agree that every word is a source of vibrations when it is pronounced and has an impact, like in the case of mantra shastra, but definitely the vibration of the name is not strong enough to change one’s destiny neither by changing the spelling of it ( not talking about enchanting the name of GOD ).

If by changing the spelling of the name or name change as per astrology, the destiny of a person can be changed then in the world all people would be happy and fortunate and there will not be any miseries as the remedy is quite easy to do. 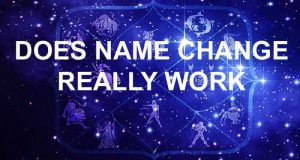