When will I get a job astrology

This is a case study of a native, jobless for quite sometime wanting to know when will I get a new job astrology and also wanted to know will I get a government job according to astrology. 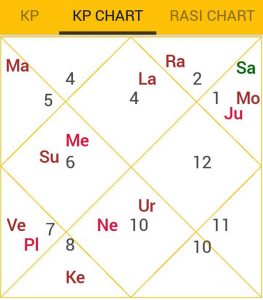 The 10th cuspal sublord in the horoscope is rahu and very strongly signifying 1,5,6,8,10 and 12th house as its untenanted in planet level, mercury – 8, 10 and 12th house in nakshtra level and Saturn – 2 and 3rd house in sublord level.

From the analysis it is understood that job is promised in her vedic horoscope, but the native will not have a smooth sailing job. There will be ups and downs in the field of services as in the nakshtra level the 5th and 8th house will cause instability and create worry and tension like atmosphere in her working arena and so the native will tend to leave the job and try for another job. This will result in gap between jobs and multiple job change and this is a fixed destiny.

In order to qualify for a government job the 6th cuspal sublord should have connection with the sun in its signifying level. Here because of its absence it confirms that the destiny do not favor government job for the native in question.

The current running mahadasa venus is also showing mixed impact of happy and worries during its period. The 12th house in planet and nakshtra level and 8th house in nakshtra level is showing hurdles in the signifying events and also will create worry, tension and sudden happening of events which could be positive or negative. Maximum of the planets are not supportive of the job event and so their antardasa period is also not supportive and so its creating hurdles and delay in getting job as per astrology.

Mercury is signifying 8,10 and 12th house in the planet level, Saturn – 2 and 3rd house in nakshtra level and moon – 9th house in sublord level.

It is seen that mercury is supporting the event but not very strongly so mercury pratiantardasa will not give the event and so we need to analyze the next pratiantardasa period and its ketu.

Ketu do not qualify to give job event as in nakshtra level the 5th and 8th house negate the event. The next pratiantardasa period is of venus.

Venus is qualifying as it is untenanted and thus signifying the 11th house of wish fulfillment and also in nakshtra level it is signifying 2,10 and 11th house to give result of job event. The venus pratiantardasa is from 5-12-2020 to 25-5-2021.

So it is now confirm that the native will get job during the above stated period. To arrive at more accurate period of time, one need to study the panadasa period which works under the pratiantardasa period.

The coming year 2021 will give native a break in job. At present period the native is also thinking of doing something independently as she loves freedom at work. Working on many ideas but still not fixed anything yet.