This is a horoscope analysis of a native questioning can I become an actor as per astrology and have success in film industry as per astrology  and want to know his good time to start his acting career.

To study the career & success and career in acting one need to study the planetary combinations required in the horoscope to become an actor or actress and make career in film industry.

There are various astrological combinations for successful career in acting in horoscope to become an actor. Astrological factors for career in film industry has to studied first in the horoscope analysis.

According to the birth details DOB 26–5–1993 at 01:03 PM in Bangalore, India,  the analysis is done according to KP vedic astrology padhatti / system. 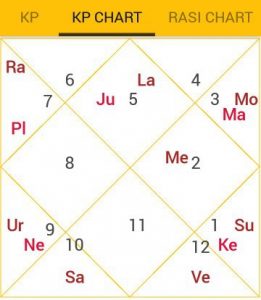 Total horoscope analysis to know can I become an actor

From the analysis it is seen that few of the planets are weakly supporting for the field of art and even the mahadasa period also not supporting very strongly and a person can not get success if the said event is not promised in the horoscope. The native may get few openings as the mahadasa period is showing some feeble support  but the success rate is not encouraging and hence can not have a long run in this career. It is seen that the native will definitely try to have some taste and experience of the industry.

To be an actor the horoscope should make strong promised and equally mahadasa should also support, then only a person can be a successful actor.

Here the analysis do not show any strong support for acting profession and so the native can not become an actor. If the native tries then it will lead to frustration in life unnecessarily. Astrology is a guide for better tomorrow so I should use its guidance for his better prosperity. 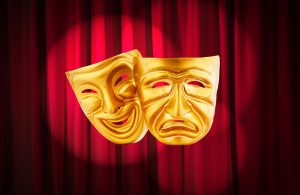