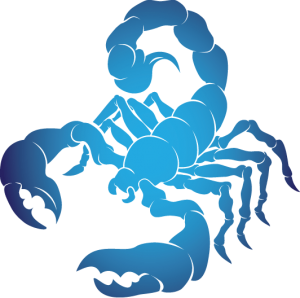 Scorpio is the mystical side of Mars, but it doesn’t mean it is the negative as Scorpio is known as the most intense sign because there is a war going on within them 24/7  with themselves, wanting to know the secrets of this universe and how to achieve power with those secrets. This is why Scorpio people make the best psychics, astrologers, numerologist, mystics and conspiracy theorist, because they want to get to the bottom of things.

They are short tempered, self-confident and courageous people. They are violent and do not care for repercussions in scuffles and trifles. They sometimes harm their health by addictions. They use rough language and are straightforward in their speech. They do and finish their work quite fast but irritate others by their nature.

The glyph for Scorpio represents the male sexual organ, which is indicative of the Scorpio fascination with sex. When cornered, a scorpion will sting you or, if unable to do so, will sting itself. This tells us a little about the pride of those born in Scorpio.

Most Scorpios have a strong intuition which usually emerges as a ‘gut feeling’ when they meet someone new. The typical Scorpio will size someone up in a matter of seconds and once they have made up their mind about them, they rarely change their opinions. To be fair, they are often right first time when deciding about people. They may not know a great deal about those they meet, but they know whether they can trust them.

Scorpios do not make friends easily, but they are loyal to those friends they have, and defend their friends vigorously should the need arise. They are strong, silent types, who lend weight to the saying ‘still waters run deep’ and so naturally secretive, they can be relied upon to keep a secret.

Scorpion may find security and comfort in material things and seek out emotional intensity, no matter what there is. They are diggers when it comes to the world of emotion—they can see beyond facades and cut right to the core of a person. This ability to “see” what isn’t obvious to the rest of the world can be intimidating to others or wildly attractive, depending on the audience.

Their deep-seated need for transformation and rebirth can manifest itself in the lives of Lunar Scorpios in different ways. Most have powerful, emotionally intense lives. Some feel like it is beyond their control—these natives seem to attract emotional upheaval, and their lives appear to consist of plenty of dramatic ups and downs. However, when accepted as an emotional need, rebirth and change doesn’t need to be so dramatic and overwhelming. In some way or the other, Moon in Scorpio natives seek out intense experiences. If their lives are regular in any way, there can be an unconscious need to test their own strength and stir up emotional excitement. Self-awareness and acceptance is probably the best way to handle this deep need for emotional drama.

Doing things halfway or having meaningless relationships simply doesn’t fulfill them. Lunar Scorpios want all or nothing.

Moon in Scorpio people often have a strong fear of betrayal. They seek out commitment, and feel the need for a partner to give up something for them. Some will put the people they love through a series of tests, and these are not always conscious. Their apparent suspicion can be trying for the people who love them. However, once committed, Moon in Scorpio people can be the most loyal and protective partners around.

Even the shy ones have enormous presence. Their lives are emotion-driven, yet many Moon in Scorpio natives spend a lot of time controlling and mastering their emotions. Their intuition is enormous, although it is sometimes self-serving.

Moon in Scorpio people radiate strength. Even in the absence of experience, they seem to “just know” things. It would be difficult to shock or scare away Lunar Scorpios in the face of emotional honesty and power. Some people instinctively want to lean on them, and other less brave folk run a little scared. Lunar Scorpios have exceptional “radar” that allows them to size up a situation—and a person—quickly and expertly. This ability to understand human motivation and nature can be too close for comfort for some, and enormously comforting for others.

Many Lunar Scorpios are intelligent and astute. Those that use their enormous powers for intimacy and honesty are the happiest, and they make the most interesting and rewarding friends and lovers.