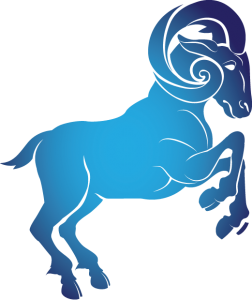 Aries sign is ruled by the planet Mars, which radiates the Aries colour RED. Being a fire sign, Arians are motivated by goals and challenges, but because they are also a cardinal type, they tend to lose interest or run out of energy before the goal is reached or the project is completed. In general terms, the fire signs are not the most diplomatic types in the zodiac, preferring to be honest rather than tactful. They are best suited to situations where energy and enthusiasm are required, as they have these qualities in abundance.

Generally aries traits as a rule are solitary by nature, they have smiling faces and are less spoken. They are brisk walker and have thin teeth in lower jaw, upper jaw may sometimes have long teeth protruding out of the mouth. Anger reflects from their faces. They have ample travel and frequent transfer from place to place in life. Service or business they acquire has touring feature. Usually they may have bleeding teeth. They possess limited intelligence. They prefer to work under directions and guidance from other. Their eyes acquire red or pale colour. They have scars on forehead or on face. They are temperamental in nature and are prone to fevers and blood diseases. They may have some skin diseases or are prone to them. They have large eyes and rough hair.

Aries personality are usually short tempered and impatient in nature. They are ambitious, courage and vigilant for self-respect. They shape their own destiny by dint of struggle and hard work. They are straight forward, generous and lover of freedom. They are practical at work, and work for welfare in many areas of the social fabric.

Aries zodiac sign people possess inner passion and fire and their emotional issues take precedence–there is simply no pussy-footing around when it comes to dealing with the feelings. And, dealing with new sentiments and needs stirs up a huge desire for activity. Moon in Aries has a need for acting out their needs, with no time to waste. It is hard for them to see the long-term, or to wait for things to happen. Instant gratification rules!

Often original and easily inspired to action, Arians are quick to start new projects, but can become impatient if the planning stage takes too long. They need to develop patience with those who prefer a steadier, more moderate approach, for their enthusiasm can be interpreted as bossiness by some of the less hasty signs.

Oddly enough, this is a very defensive position of the Moon. These natives take things very personally, and they deal with problems by facing them right away so that they can then get on with other things. Their flare-ups generally end almost as quickly as they started.

Aries moon sign have an unmistakable independent streak and they put themselves right out there in the world, and make an impression in whatever they do. Their self-confidence is actually variable. Although a strong personality is projected, Aries moon sign people go through plenty of ups and downs. Their moodiness is not like Cancer or Pisces moodiness–they don’t withdraw into themselves or escape the world when they’re down. Instead, they are temperamental.

Aries personality is such that they sometime enjoy trouble and confrontations. Indeed, this position is easily bored with environments that are too peaceful. Their homes–especially their childhood homes–are often battlegrounds. They rule the roost, or at least want to, and are not the most peaceful of folk to live with!

Aries moon sign men and women are prone to have plenty of crushes and other short-lived yet intense desires. “Needs” and “wants” are indistinguishable to Lunar Aries sign at any given time. In their minds, what they want is so powerful that it becomes an absolute need. In young adulthood, they can be dangerous with a credit card. Whoever offered the advice to freeze your credit card in a container of water, and then let the block of ice thaw before using the card, unwittingly had people with Aries moon sign in mind. The whole idea was to see if the shopping whim of the moment would pass by the time the card was ready to use. Still, with this scenario, I wouldn’t be surprised to see Moon in Aries hacking away at the ice. That is, if Aries actually takes the advice in the first place!

Others will appreciate that people with Moon in Aries zodiac sign rarely sulk or play any drawn-out games of manipulation. You can pretty much know what they want at any given time. They are generally ruled by their own emotional needs, and they’re not always as concerned about others’ needs during these “emergencies”. Somehow, they have people around them scrambling to help them solve their problems. There’s an aura of childlike innocence around Lunar Ariens, even when they’re getting their way again, that can be charming indeed!