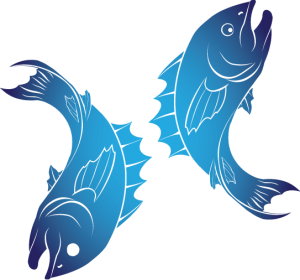 Pisces sign is the 12th and the last sign of zodiac, which means it represents the 12th house of astrology. 12th house shows your hidden talent, inner self, primality, exile, isolation, dream world, the other dimensions and physic connection. Since this sign is ruled by Jupiter, Pisces is more about the spiritual realm more than romantic realm. Pisces people live in their own world most of the time, and they do not like to be bothered, because it disturbers their cosmic connection with thyself.

The glyph for Pisces represents two fish joined together by a cord which symbolise this sign and they can adapt to the currents, especially emotional currents. These traits are strengthened because Pisces is both mutable (adaptable) and a water sign (emotional). Pisceans are usually sensitive to the feelings and the needs of others, often sacrificing their own needs to please other people.

Pisces zodiac sign people are dwarf-heighted,have small parts of body and beautiful nose,are lazy by nature but versatile, ardent lovers of pleasure, good writers. They easily trust people. They have simple life. They face dangers in early life and are sometimes courageous and at times timid. They develop friendship with leading and popular people. They do work after meticulously pondering over matters and issues.They commonly become popular because of their easygoing nature and tend to be more emotional rather than rational.

The duality of the Pisces personality nature is symbolised by the fact that the fish are swimming in different directions. These people can be  compassionate and patient when others disappoint them, or they can become cold and ruthless, unable to find sympathy or empathy for the needs of others.

Pisceans offer compassion and service for years at a time without thanks, sometimes even being abused for their efforts. Pisceans sometimes avoid confrontation, tolerating difficult situations rather than voicing their frustration or disappointment. Thus things appear to run smoothly on the surface, but the problems still exist underneath.

These people are able to make great personal sacrifices if they feel that it is for the common good. They can be quite selfless, in a manner which can be a source of inspiration to others.

Pisceans are romantic and sentimental people, with a well-developed sensitivity for pain in others. They are patient and tolerant with those who need assistance, even if those people don’t know it themselves.

Pisces traits are known to be dreamy and not always in touch with reality, however, though these people may not always show real-world savvy in day-to-day, practical affairs, they make up for this with remarkable intuition. They can put themselves in anybody’s shoes with extreme ease. On the plus side, this endows them with remarkable compassion and love. The down side with this apparent ability to break down boundaries is that these people can easily lose themselves in the suffering of others.

Their sense of humor is delightfully silly and a bit odd. These are perceptive souls who seem to be in touch with all the nuances and subtleties of human nature. Often this comes through in a strong sense of humor that is more of the receptive kind than the type of sense of humor that would make people the “life of the party”. It’s generally pretty easy to get them giggling.

Moon in Pisces people may get tagged as “spaced out”, but there’s a lot more to them than meets the eye. They feel things out, and rely on their intuition. It just doesn’t feel right for them to do otherwise. Their dreaminess can mean plenty of moments of absent-mindedness. These times of oblivion can land them in all sorts of predicaments with others who can too easily misunderstand these complex souls. Without plenty of space and time to daydream, Pisces Moons easily get overloaded with life. Give them room to be alone with themselves, and they’re generally able to take on the world—even if their style when they do so is not always conventional or understandable.

Generally pisces sign compatibility are easy with everyone as they are considered soft-hearted and sweet, Lunar Pisceans care about others and are easily touched by human suffering. This tendency gains them the reputation as suckers for sob stories. Although this may sometimes be true, many Lunar Pisceans learn, in their lifetimes, how to discern between sincerity and manipulation. Still, they definitely do have plenty of soft corners.

There’s a delightful accepting side to Moon in Pisces that is sometimes mistaken for weakness. Pisces is the twelfth and last sign of the zodiac, and thus carries with it a little of each sign of the zodiac. As a result, they see themselves reflected in the behavior of others, giving them seemingly boundless compassion. Since the Moon represents our instinctive nature, Moon in Pisces sign seems to know how things feel without actual experience. For example, they may have never had sex, but seem to know all about it — even, or especially, the subtleties of it. The ones that aren’t too shy make awesome actors and actresses.

This ability to empathize even in the absence of experience gives them an open mind and heart. Most long to express this through writing, music (both listening and making), poetry, and art—in fact, the happiest people with this position do just that.

Though some are doormats, most Pisces Moon sign zodiac people instinctively know when they’re due for a much-needed recharge. It’s at these times that they retreat from the world (and its harsh realities) if only to gather strength to face everything and everyone again. Solitude is important to them, but they also need people, so their retreats will usually be short-lived. Pisces Moon individuals believe; and, let’s face it, the world needs Piscean leaps of faith.